Working, Speaking, and Making Your Mark

For his 1974 book, Working, renowned oral historian and radio broadcaster Studs Terkel spoke with dozens of working-class people across the United States about what they did for a living and how they felt about their work. The first interview of the nearly 800-page compilation takes place between Terkel and a disenfranchised Pennsylvania steelworker by the name of Mike LeFevre. More a candid conversation than a formal inquiry, the interview covers the gamut of experience, including workplace politics, misplaced aggression, and the division of labor, though perhaps the most poignant part of the conversation concerns LeFevre’s thoughts on recognition for his efforts. 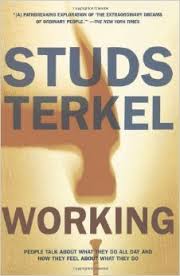 LeFevre says that, as a laborer, he’s a member of a “dying breed.” The work is often thankless, but it pays his bills. And, more importantly, it helps him to provide for his family. He says that, since he never had the chance to go to college, he intends to make sure that his son finds his way into the upper class by giving him a proper education, and so he pulls steel, day in, and day out. And though each day for LeFevre tends to blend with the others in his memory, he finds a way to make his mark on his work, as it were, by dinging up the beams that come across his line with a hammer just to distinguish them from all of the others. He says he’d like to see a foot-wide strip on every building listing the names of those that helped to construct but, as it stands, his method of anonymously signing his beams with the head of a hammer had to suffice for him. “Picasso can point to a painting,” LeFevre says, “…a writer can point to a book.” But, he says, for the general laborer there is no identifier; no pride to be had in the finished product. But human beings need that something tangible, he says: something to prove that they’re impact on the world was real; that they were, in fact, there, and that what they did counted for something. “Everybody should have something to point to,” he says.

And so it goes on the professional speaking circuit, as well.

Writing a book—be it self-published or distributed by a major industry player—is generally regarded as one of the best ways to position yourself as a leader in any field. And with respect to public speaking, having that “something to point to” is a great way to prove to potential clients that you’ve got the know-how to entertain, educate, and influence the audience that they’re hoping will (or, in the case of some business conferences, obligating to) attend. Lisa Tener, winner of a Silver Stevie Award as 2014’s Coach/Mentor of the Year, was once quoted in the Women’s Advantage Calendar as saying, “To be seen as an expert, write a book. To write a book, become an expert.” Thus, the question begs to be asked— where do you start?

The bottom line is this: you are already an expert at something, even if that something is based on the lessons you’ve learned by living your own life. You’ve already failed in some unique way, learned something in that failing that only you can translate to the greater public from your perspective and, finally, you succeeded, if not by becoming a multi-millionaire (yet), then by finding a way to continue surviving. And if that alone is not enough to motivate you to share your expertise with the world, then consider the fact that book signings after speaking engagements are a great way to tack-on a few hundred dollars at each stop while working on the road. And those books you sell will continue to work for you, as well, sending your personal message out into every community you visit long after you take your leave to speak in the next town.

Last year, the National Speaker Association inducted five professional motivators into an elite club called the Council of Peers Award of Excellence (CPAE) Speaker Hall of Fame. Beyond their ability to motivate a crowd and make a living off of it, Simon T. Bailey, Walter Bond, Jeffrey Hayzlett, Stephen Shapiro, and Laura Stack all have something else in common, and it has nothing to do with advanced degrees, a history in politics, or a bunch of letters stuck onto the ends of their names. Rather, in addition to being great public speakers, these people are also all dedicated writers, each with multiple titles to offer under their belts.

Keynote speaker, best-selling author, and contributor to both Forbes.com and Inc.com (often on the subject of public speaking, itself), Micah Solomon is well aware of the connection between authorship and speaker credibility. “While professional speaking is a skill of its own,” Solomon says, “nobody wants a speaker who doesn’t have something to say.” And, says Solomon, “one way to prove to yourself and to potential audiences that you have something to say is to put it in writing.” Naturally, though he’s been published across multiple formats several hundred times, Solomon says he has “no plan of reducing (his) written output.”

After all, talking in front of a crowd is one thing, and professional speaking can certainly be a great source of income for in-demand rhetoricians. Regardless, if those speakers intend to stay in-demand and thus continue to command between $2000 and $50,000 for every 45-to-90-minute speech they are called to deliver, even the best speakers on the planet are going to need something to point to.