As a commercial pilot, airshow pilot and former fighter pilot, not to mention motivational speaker and author, you might not think Espenship is prone to failings. But there it is, in the first chapter of his book: Espenship tells of how he once skipped one of the steps in the pre-flight safety inspection as he and his brother John tried to beat a storm in his vintage WWII plane. 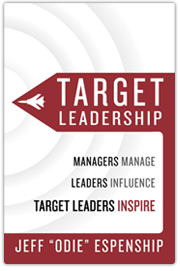 While nothing happened as a direct result, he believes his action might have influenced his brother to do the same thing six months later. John and friend and fellow pilot Craig Morrison were killed when the plane
crashed.

“As the owner of an air show business, I ask ‘Was there something I did that explained his behavior? A shortcut that cost him his life?” asks Espenship.

But from failings come inspiration, and when Espenship took a long, hard look in the mirror, he decided to acknowledge his failings and rebound from them. More than that, he decided to try to help others avoid such pitfalls.

Target Leadership is the title of his book and his website. He believes target leaders emotionally inspire others.

“It’s not preachy,” he says of the book. “It’s just examples, techniques for fixing things.”

Those things can range from stories about flying—his lifelong passion—to berating his daughter for driving while talking on her cellphone. Something he had to admit he himself did.

While the book may have just been published in June of this year, Espenship has been working on it for three years. “I thought it might take a year,” he says with a laugh.

Like so many others, Espenship says he had friends tell him he should write a book. But unlike 98 percent of those who are told that, he buckled down and actually did it.

He says that has helped him build his corporate speaking career.

“If someone calls (for a potential speaking engagement), the fact that I’ve written a book and gotten reviews is a plus,” he says.

He also features the book on his site, both for sales and to showcase his expertise.

In addition to his increased credibility, Espenship says the speaking engagements also build sales. “I’ve had corporations call me and want to buy them when I speak.” he says. “That’s where a lot of sales come from.”

Espenship also builds his audience through social media such as Twitter and a blog.

And as the book has been available such a short time, Espenship believes his success will only increase.