Prior Planning Prevents...Well You Know

That aphorism has been around for nearly a century, but Marty Clarke took it to heart. The one-time corporate executive is in demand these days as a communications consultant and speaker, but that’s largely because while he was in between jobs, he gave himself another one: Author.

“The company (he was with) had imploded,” Clarke said while in transit from one business meeting to another. “I found myself with time off, so I used that time to write a book.” The result was Communication Land Mines: 18 Communication Catastrophes and How to Avoid Them, published in 2004.

Now, we’ve all seen television shows where someone steps on a land mine, and we know what happens next. Clarke says in one’s professional life, land mines can be just as dangerous, but with one distinction: You usually don’t know you’ve stepped on one. There it is in print: On page 10 of Communication Land Mines, Clarke says “The damage done by communication land mines is often silent and invisible.”

Whoa. Then how do you know if you’ve stepped on one? And if you have, how can you mitigate the damage and ensure you don’t do it again?

Those are the questions Clarke sought to answer. He takes on such topics as leaving a far-too-lengthy voice mail (“The Endless Message”), not speaking clearly and slowly when leaving a telephone number (“Phone Number at Mach Speed”), going on and on ad nauseam in email (“The Term Paper”). The former English major also takes on some grammatical challenges (who vs. whom, for example), as well as those who send much more information than is needed or even wanted (“The Metric Ton Mailer”).

All told, the book walks people through a series of gaffes which have the potential to annoy or frustrate those on the receiving end, and possibly even derail the career of those committing the faux pas.

“My wife says all my material is born out of rage,” he said with a laugh. “When I was an executive, anytime anyone would leave their phone number too fast I would write it down.” The same went for when he’d have a similarly exasperating exchange with someone face to face or via email.

The end result was that when Clarke finally got around to creating the book, he had his topic in mind and a ready-made source of examples. “When I was ready to write, I almost had an outline,” he said.

And after writing the book, Clarke found himself looked upon with a much greater degree of respect. He says writing the book gave him credence and trustworthiness. “The book is the great legitimizer,” he said. “Gravitas is exactly correct.”

Clarke said writing a book can also give you additional insights into a topic. That’s a common theme among authors, including many of those profiled in these blog posts: financial advisor Dan Prisciotta (Defend Your Wealth), marketing expert Laura Ries (Visual Hammer), attorney Ned Minor (Deciding to Sell Your Business). In other words, what you don’t know or may not have considered thoroughly often comes clear as you research and write your book. It may even lead to further efforts. 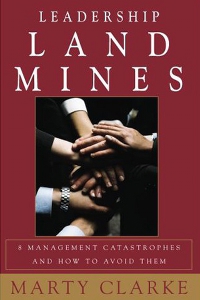 That was certainly the case for Clarke. He followed up Communication Land Mines with Leadership Land Mines: 8 Management Catastrophes and How to Avoid Them in 2005, and then four years later Sales Machine Land Mines: 6 Sales Revenue Killers and the Blueprint to Avoid Them.

Clarke said the second and third books took longer to write than his first book. For one thing, he didn’t have that handy outline already prepared. For another, he was no longer out of work, so he didn’t have as much time to devote to the books. “By the time I wrote them, I was giving speeches, consulting, and had begun training, so I couldn’t put in as much time.”

There’s your return on investment right there. Clarke used his first book to establish his credibility and expertise while building his brand to the point the public could and would seek out the author and subsequent books. Then those books furthered his reputation. You can see the same in the multiple books by such successful authors as doctors Andrew Weil and Mehmet Oz, fiction writers John Grisham and Kathy Reichs, cookbook authors Ina Garten (the Barefoot Contessa) and Marcel Desaulniers.

Now, because of his Land Mines books, Clarke is able to work at his own pace on the subjects he decides, while gaining the satisfaction of helping others avoid those nasty pitfalls. “It gave me the living I enjoy today,” he said. “Without them I would not be nearly as successful as I am.”