When should you write a book? Is it enough that people tell you that you should?

Not usually. But if enough people say it, and you have something to say, then maybe they’re right.

That was the case for Jim Milligan. The owner of Fustini’s Oils and Vinegars started his business in 2008 after retiring from 3M. Within just a short time, not only was the business taking off, his customers were suggesting that Milligan craft a cookbook. 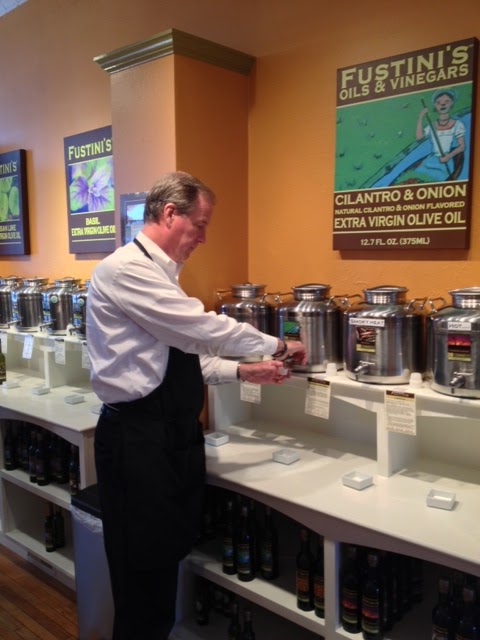 “From the minute we opened— in the beginning —customers said. ‘You should write a cookbook.’ So we finally did it,” said Milligan.

It wasn’t that easy. Milligan said the store had been so busy that he couldn’t spare the time the first three years the store was in business.

But Milligan finally decided it was time. So in 2011 he grabbed the bull by the horns, and working with local chefs, created In the Kitchen with Fustini’s.

It was an immediate hit. It was followed last year by How Fustini’s Do Fustini’s.

Milligan says the books have had a positive impact on his business.

“They’ve been very successful,” he said. “We’ve been able to bundle them (with vinegars and oils), it’s a great gift for the holidays.”

The first book featured recipes from area chefs whose restaurants were among those to use Fustini’s products. The second included recipes from staff and customers who submitted their favorites for inclusion.

Milligan says the books are a perfect complement to the store’s products.

“What we sell is a consumable. If you don’t give your customer new ways to use the product you won’t get re-buys,” he said.

“If they don’t know what to do with lavender-infused olive oil,

“For us it’s a really positive marketing tool,” said Milligan.

So much so that Milligan and company are in the midst of their third cookbook, with plans to continue at the pace of one each year.

The cookbooks are the perfect marketing piece for a business that relies on customers creating new ways to use the products that Milligan stocks in his store.

So if someone says “You oughta write a book,” maybe you should listen to them.